534   A second and final revision of the Codex Justinianus is published.   Compiling Roman law proved to be a difficult chore due to the many different versions of it in regards to any one particular topic.  While Roman law provides comparatively little basis for modern American law, outside of Louisiana, it was not wholly without influence to some degree.  The codification of the Roman law in Roman times provided the basis, later for the codification of French law under Napoleon.
1887  Legendary photographer of Wyoming, Charles Belden, born in California.
1878  The Commissary at Fort Fetterman listed the supplies on hand as being: 195 lbs. of turkey, 140 of codfish, and 11 lbs. of cherries. Date: Attribution:  Wyoming Historical Calendar.
1917   November 16, 1917: All the Distressing News. US Back in Mexico, in Combat in Europe, flag shaming in Lander, and Temptation in Philadelphia 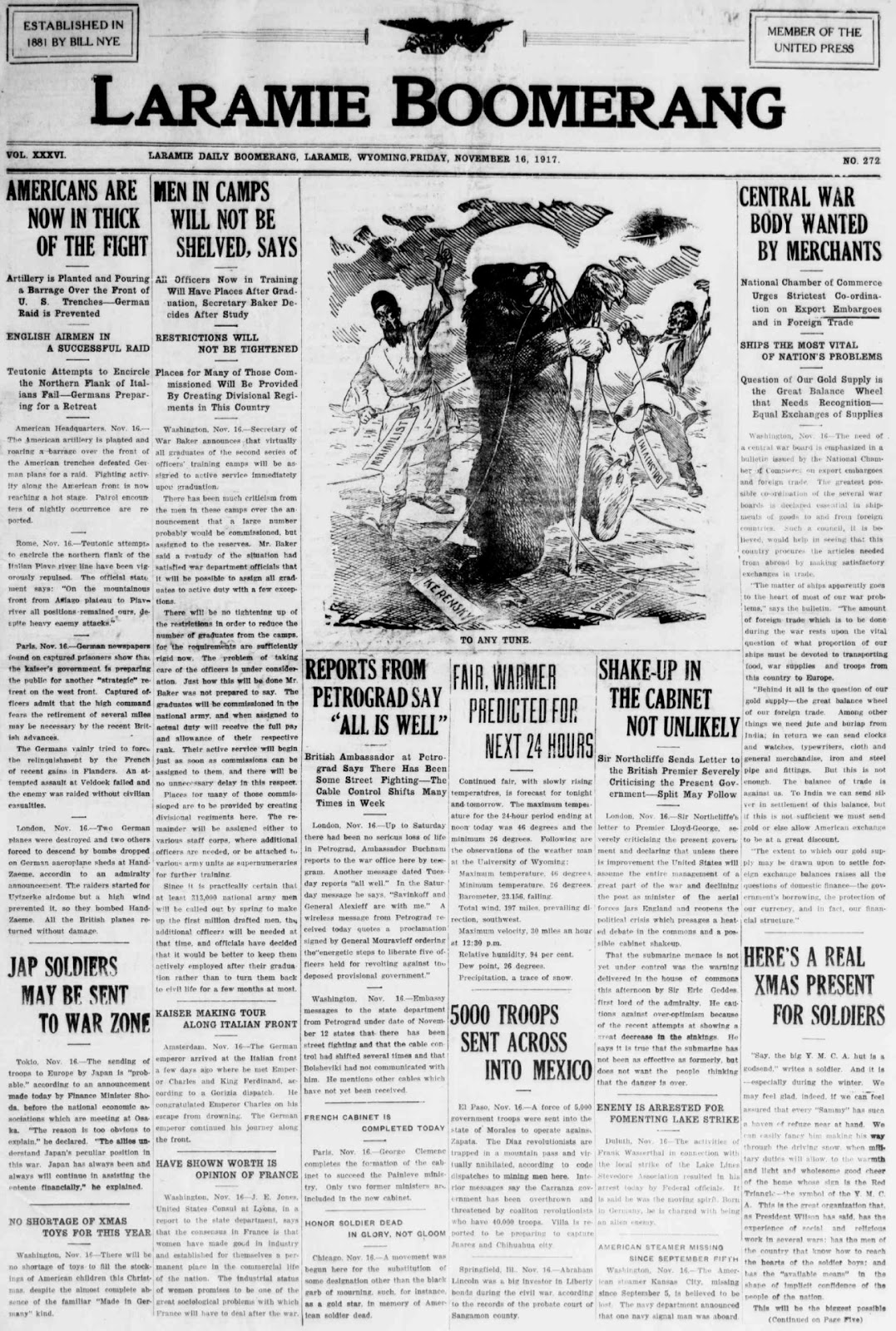 The Laramie Boomerang correctly noted that the United States had crossed back into Mexico, but just right across the border.  This was something that the US would end up doing in a worried fashion for years, showing that while the Punitive Expedition might be over, armed intervention, to a degree, in Mexico, was not.

At the same time, the press was really overemphasizing US combat action in Europe. The US wouldn't really be fighting much for weeks and weeks.

And the on again, off again, hope that the Japanese would commit to ground action was back on again. 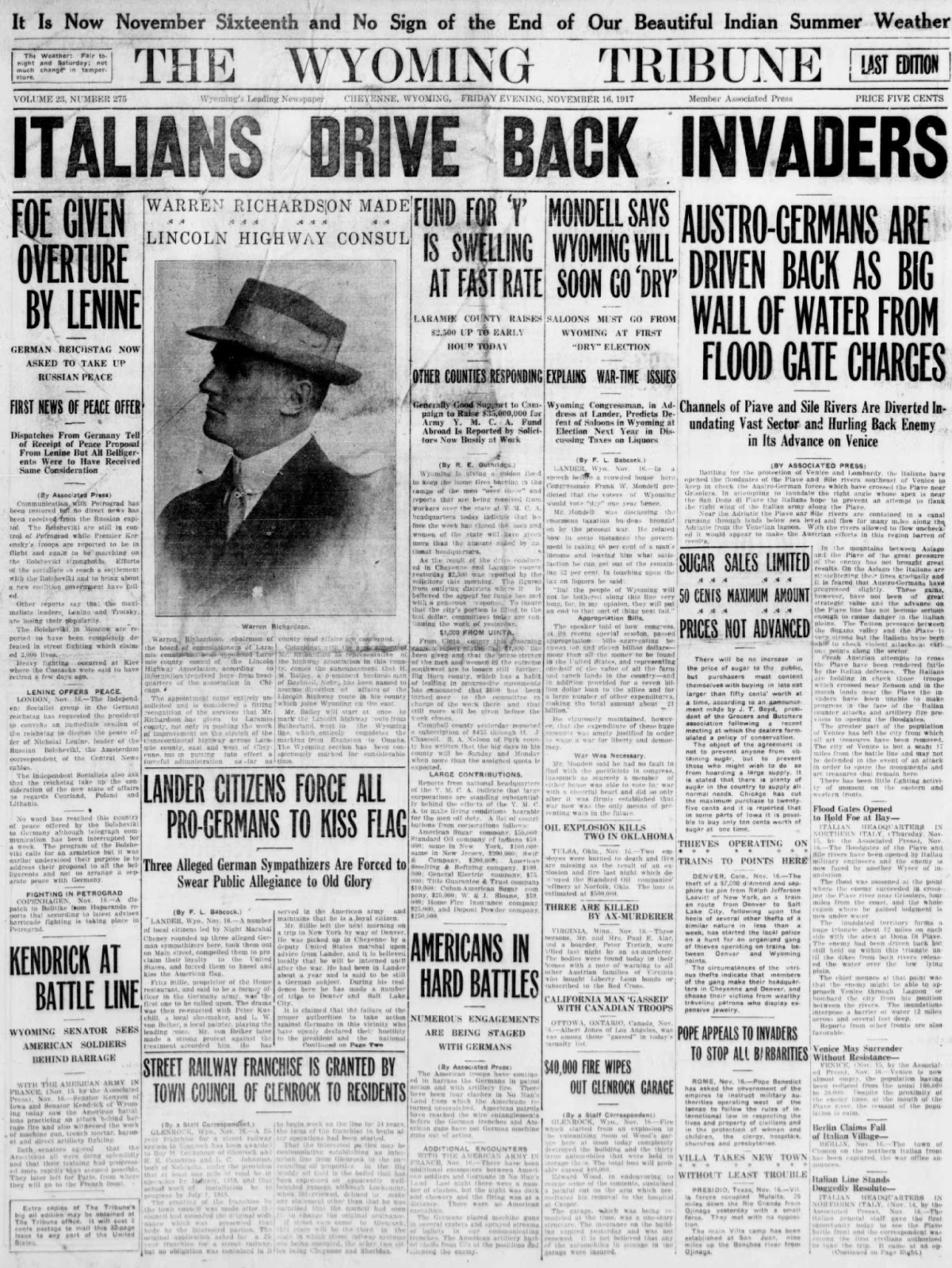 Meanwhile, in Lander, things were getting really ugly.  "German sympathizers" were being made to kiss the flag.

That probably didn't boost their loyalty any. 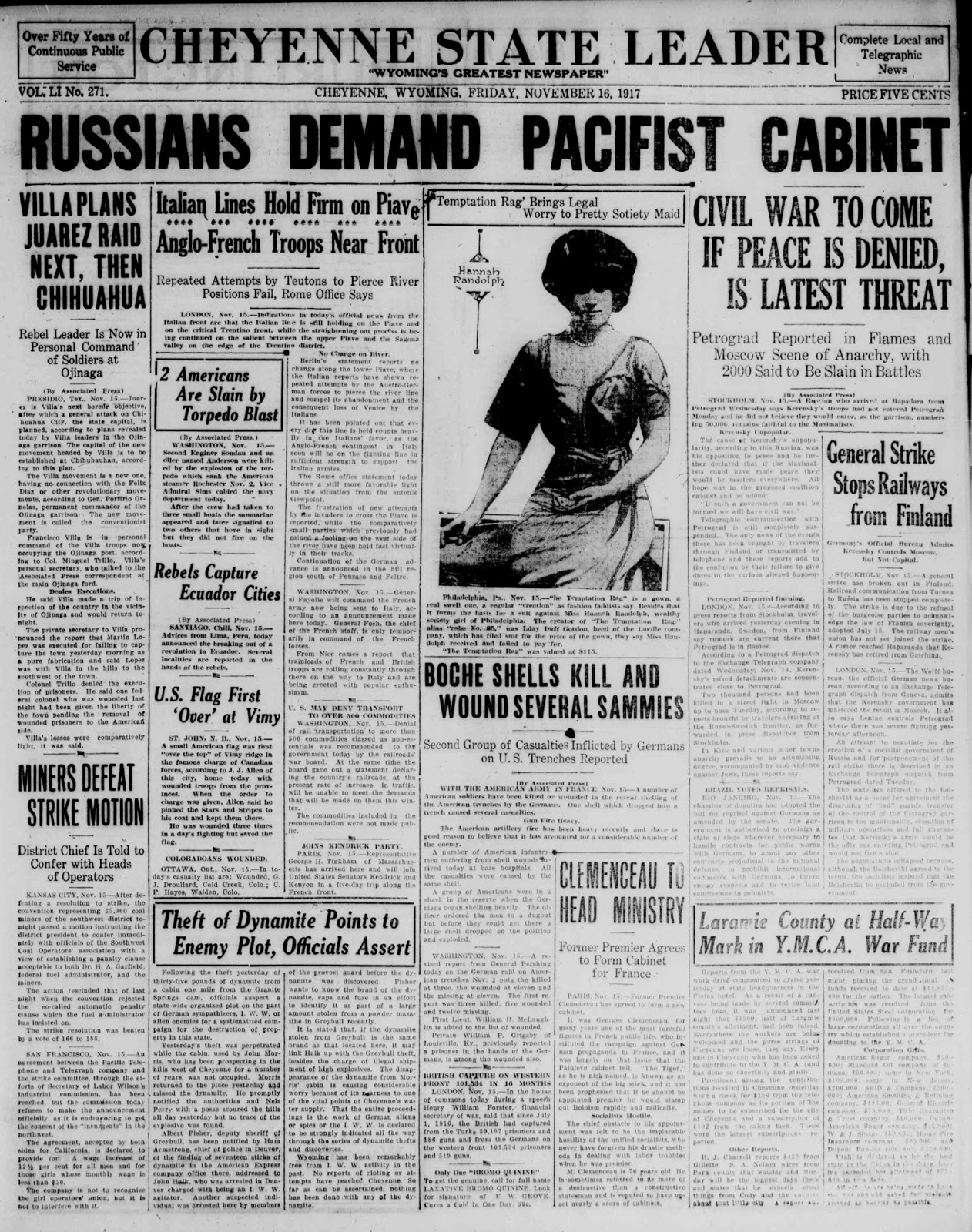 Villas expanding plans were also being noted. And, also, The Temptation Rag, a film, was being reported on, on the front page, something that takes a true scandal to occur now. 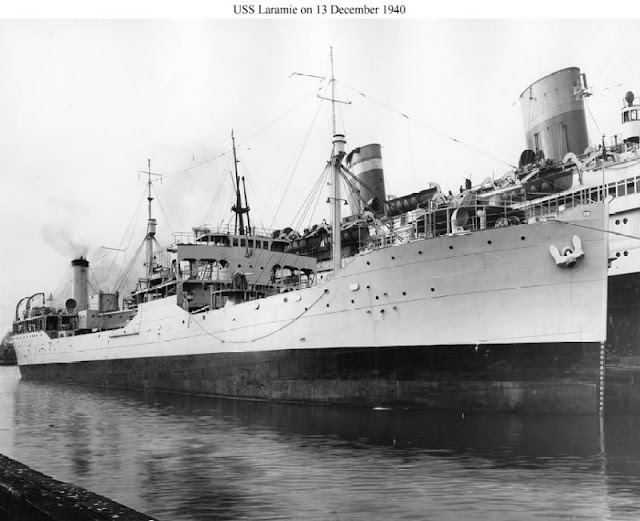 1973     President Richard M. Nixon signed the Alaska Pipeline measure into law.
1982  The Jahnke murder occurred in Cheyenne, in which Richard Janke Jr., aided by his sister, killed his abusive father. The murder was later the basis of a television movie entitled Right to Kill.
1993  A magnitude 3.5 earthquake occurred about 65 miles from Sheridan.
2002  Tom Farris, who had been born in Casper Wyoming, and who had played football for three years in the National Football League following World War Two, died.
2015  In keeping with a request from President Obama, Governor Mead ordered flags in the state to fly at half mast until sundown, November 19, in honor of the dead of the recent terrorist attack in Paris.