1892  Leon C. Goodrich, an architect who worked on the designs of a lot of Natrona County buildings, was born in Fort Collins, Colorado. 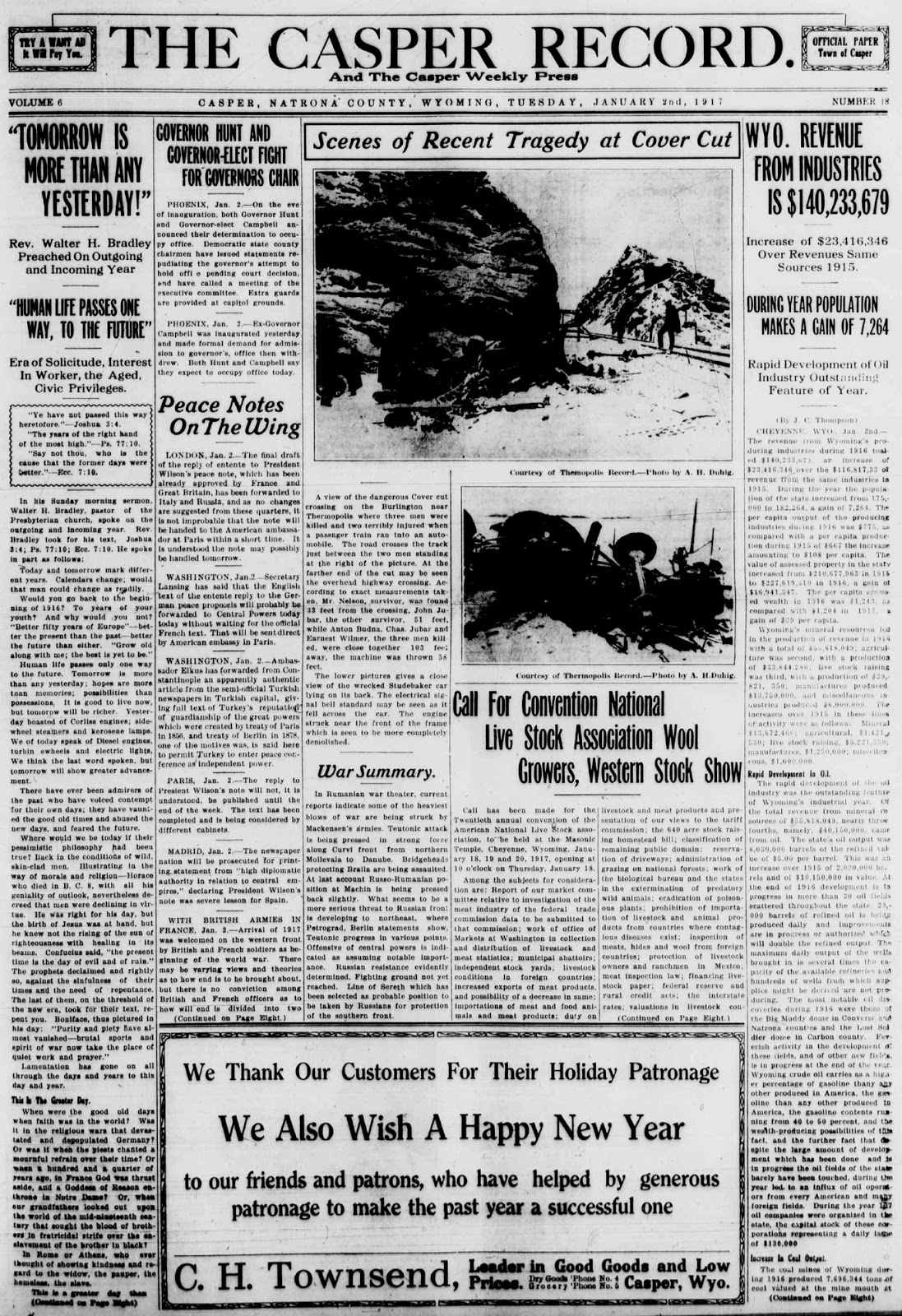 But, the Casper paper didn't feature Mexico at all.

Indeed, I'd be disinclined to put this one up, given the stories that I've been following, but for the fact that by only putting up the Cheyenne papers that covered the story in Mexico extensively I'm giving a false impression.  In Central Wyoming, when you picked up your local paper (there were two) you might not be reading about such events at all.

Residents of Natrona County Wyoming, on this day, were reading about a railroad disaster near Thermopolis. That spot, by the way, is still bad and there's been a train wreck there within the last couple of years.

Like residents of Cheyenne, they also were reading about the weird gubernatorial spot in Arizona.  Long term residents of Wyoming would recall, however, that Wyoming had a similar episode about 20 years prior to this one.

And there were the cheery economic articles, common to Wyoming papers of this era.

The Local News: They Cheyenne Leader for January 2, 1917


The Leader was less dramatic on its news on Mexico, just noting that Mexico might be getting a "sharp warning" from the US, given the directions that negotiations were heading. 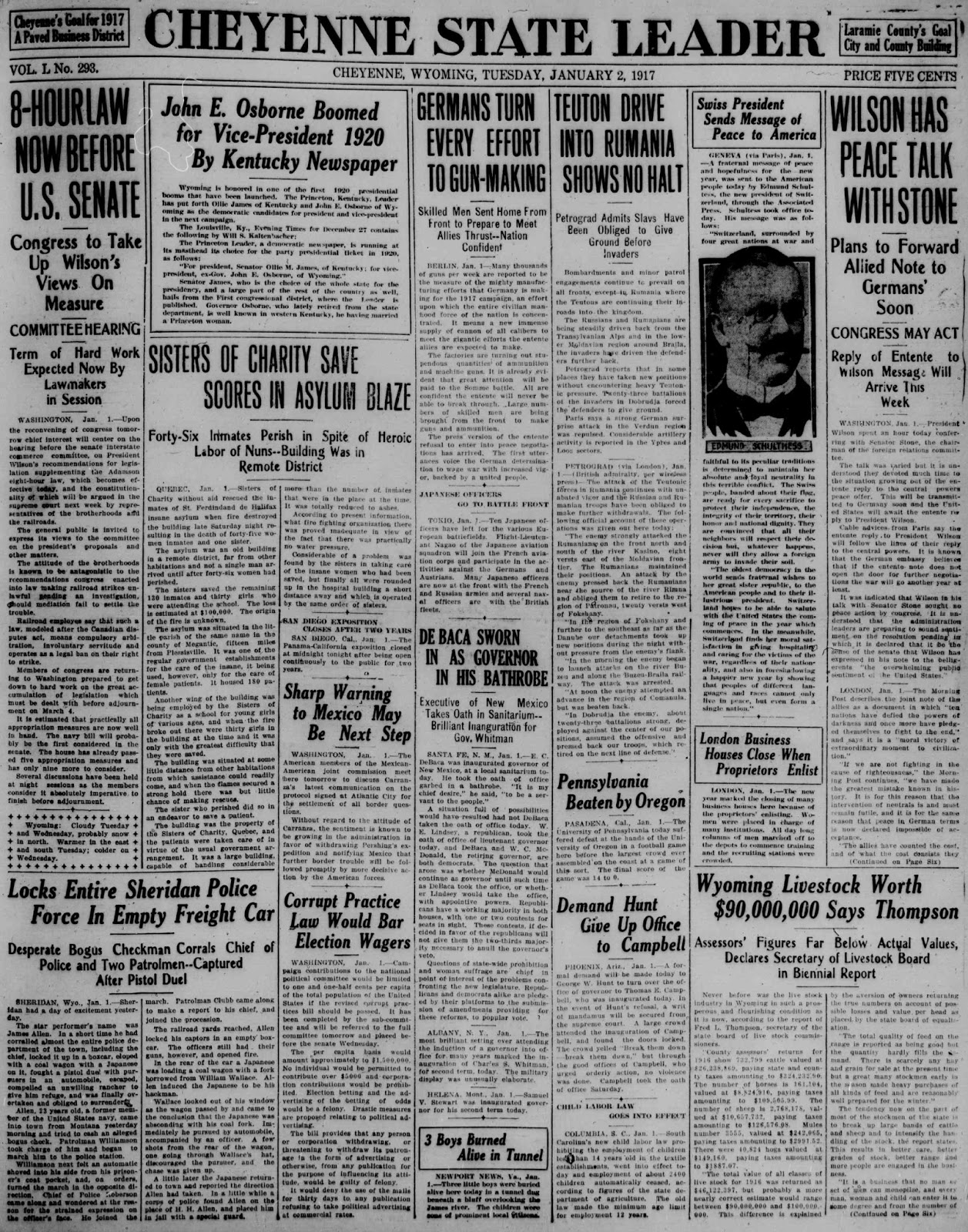 In other news, labor laws were being debated and the Sheridan police force was locked up in an empty freight car.  That's embarrassing.

John Osborne, returned to Rawlins, was being vetted, apparently, for a VP position in 1920, showing that premature electioneering is not a new thing.

Well, the holidays were over and back to work.

What did the papers have to say to Wyomingites on this day, that blury, hopeful to many, burdensome to some, first real work day of a new year? 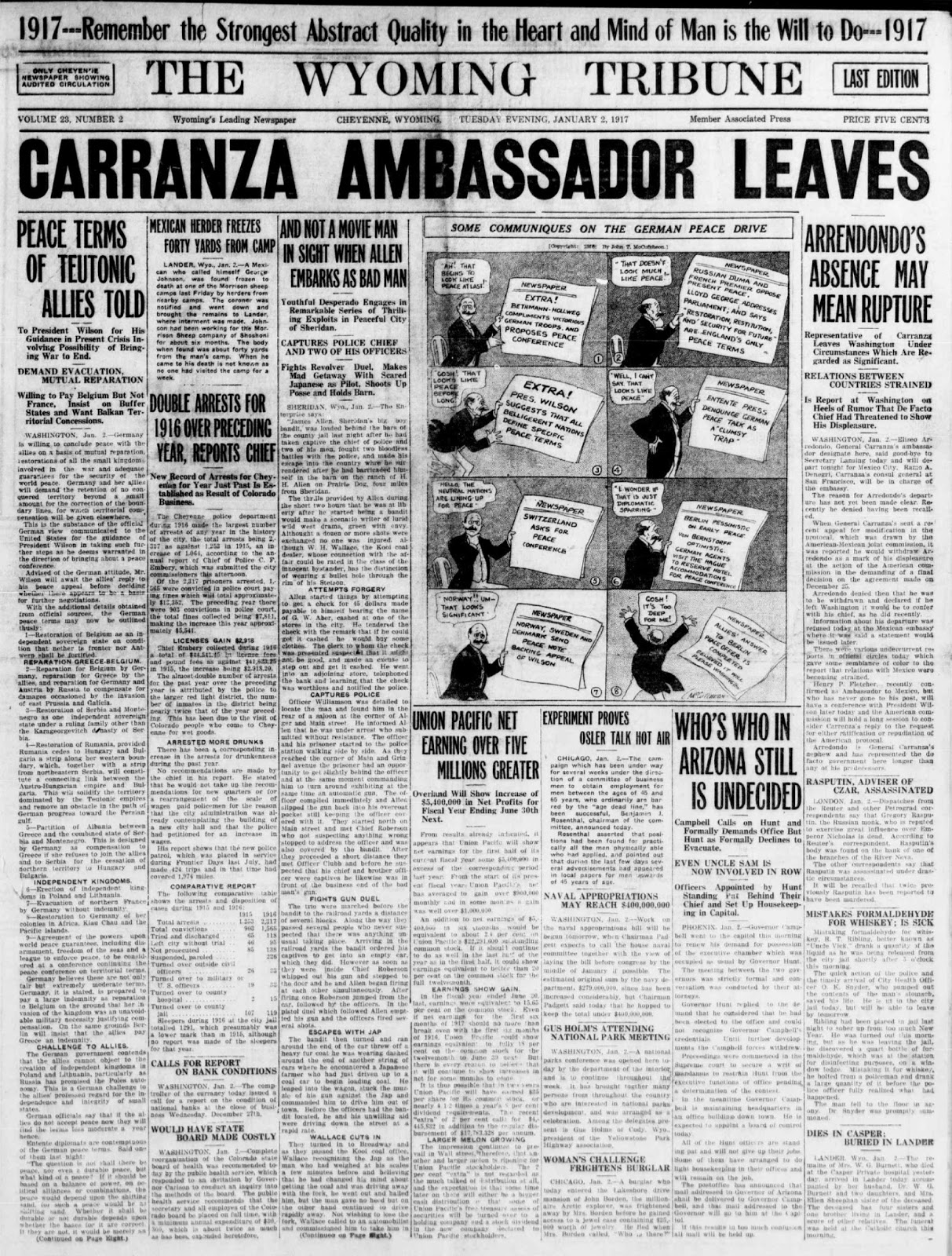 The Carey owned Tribune, after reminding its subscribers and advertiser to pay up all week, was starting the year off with a bolstering inspirational message at the top of its paper.

And the depressing news that it looked like things were breaking down in our negotiations with Mexico in Atlantic City. 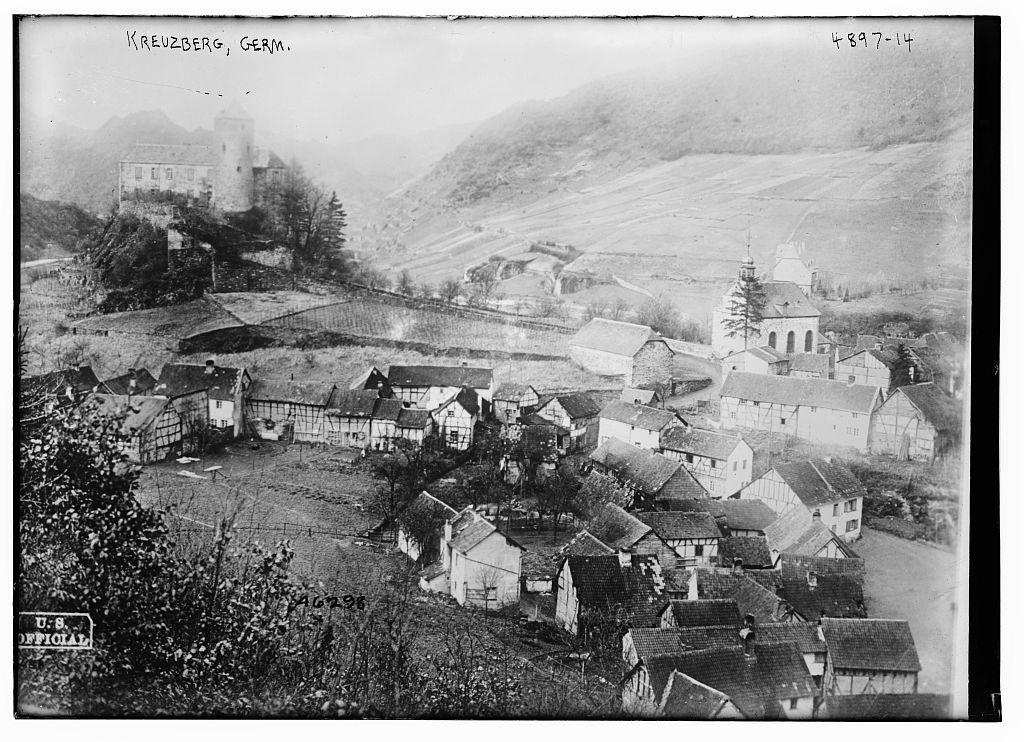 With the war over, you'd probably have been looking forward to newspapers that weren't full of war, if you lived in the Rocky Mountain region of the United States.

Your hopes would not have been coming into fruition this second day of the year. 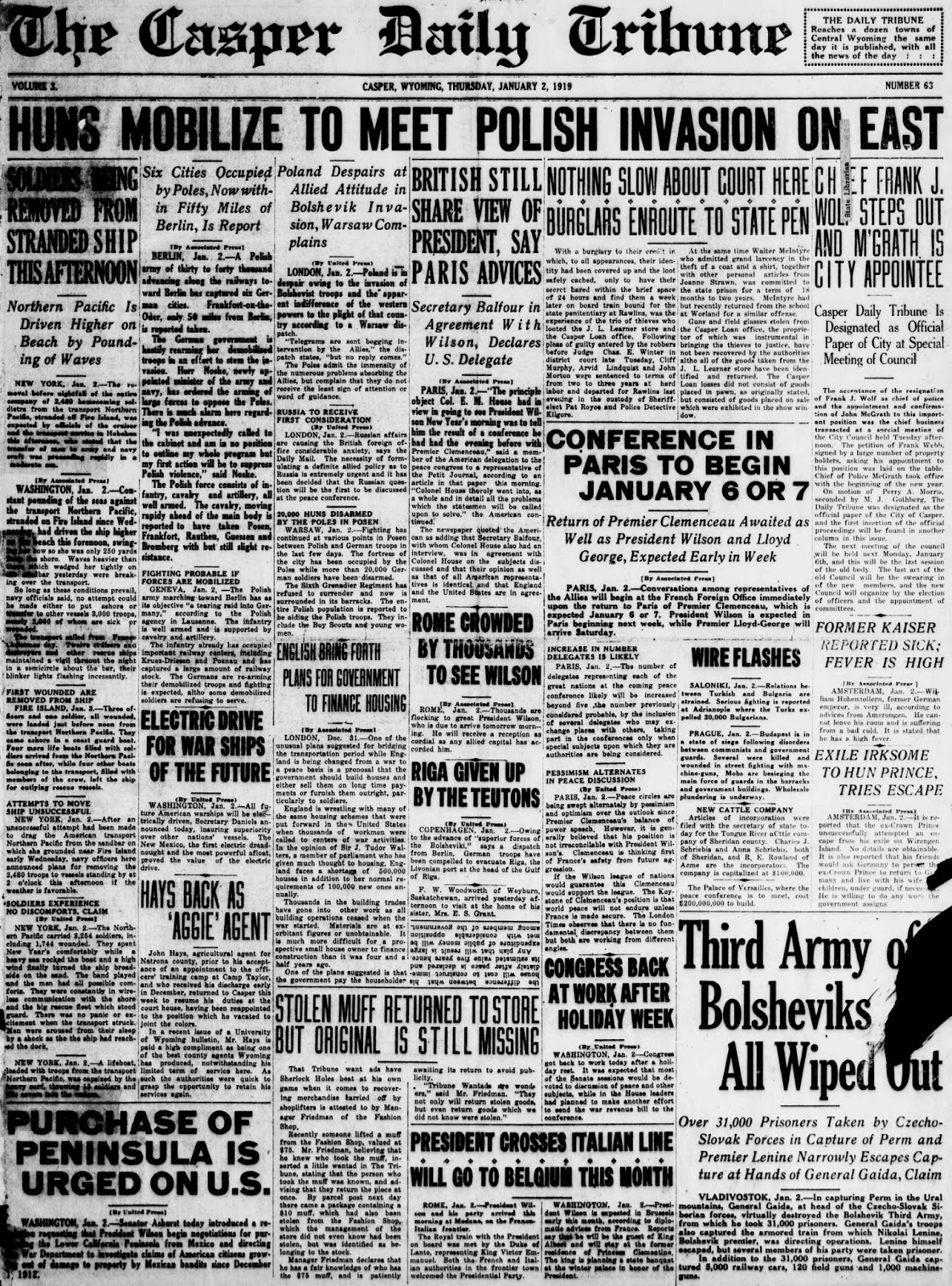 Casperites awoke to the fanciful news, which probably seemed credible given the late war confusion, that Poles were invading Germany and nearing Berlin.  Frankly, given the situation in Berlin at that time, the Poles would have been doing the Germans a favor had they done so. Be that as it may, Poles were not invading Germany but in rebellion with in the German province of Posen, and winning there.

That same morning a U.S. Senator was urging the government to purchase Baja California. . . even though there was not any evidence that Baja California was for sale.

Congress was back to work, which they aren't yet this year (2019). That will be tomorrow.

And readers learned that the march of technology had made electric drive in ships a possibility. 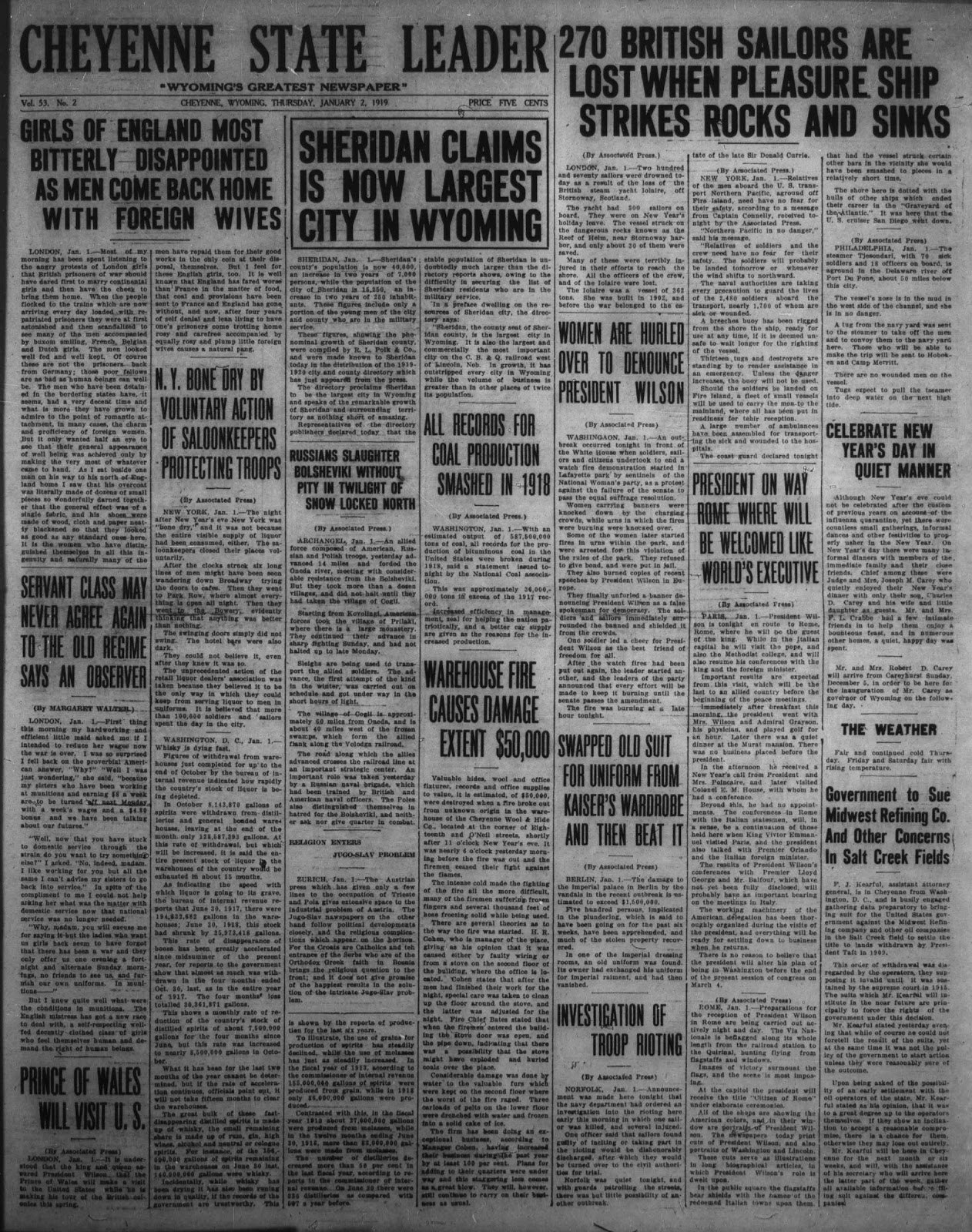 Cheyenne's readers were presented with the distressing news that Tommies were returning home with brides from the continent, which would have been distressing to most young women indeed given that the pool of eligible bachelors had been reduced by the war.

The implication, of course, was that young American women would soon be facing the same thing, which in fact they did.

Sheridan was claiming to be the largest city in the state on the second day of the year.  If that seems odd, keep in mind that Sheridan was a major Army town at the time as it was the location of a major Remount station, horses and mules remaining quite important in the Army of the day, and for many future days to come.

And Cheyenne readers also learned of the major British naval disaster that had occurred the day prior.

came today, although the news was reporting on the raids of yesterday.   Technically, the raid of January 1 was a Chicago Police Department raid, although in coordination with the Federal government.  Chicago was complaining today about the lack of help from yesterday. 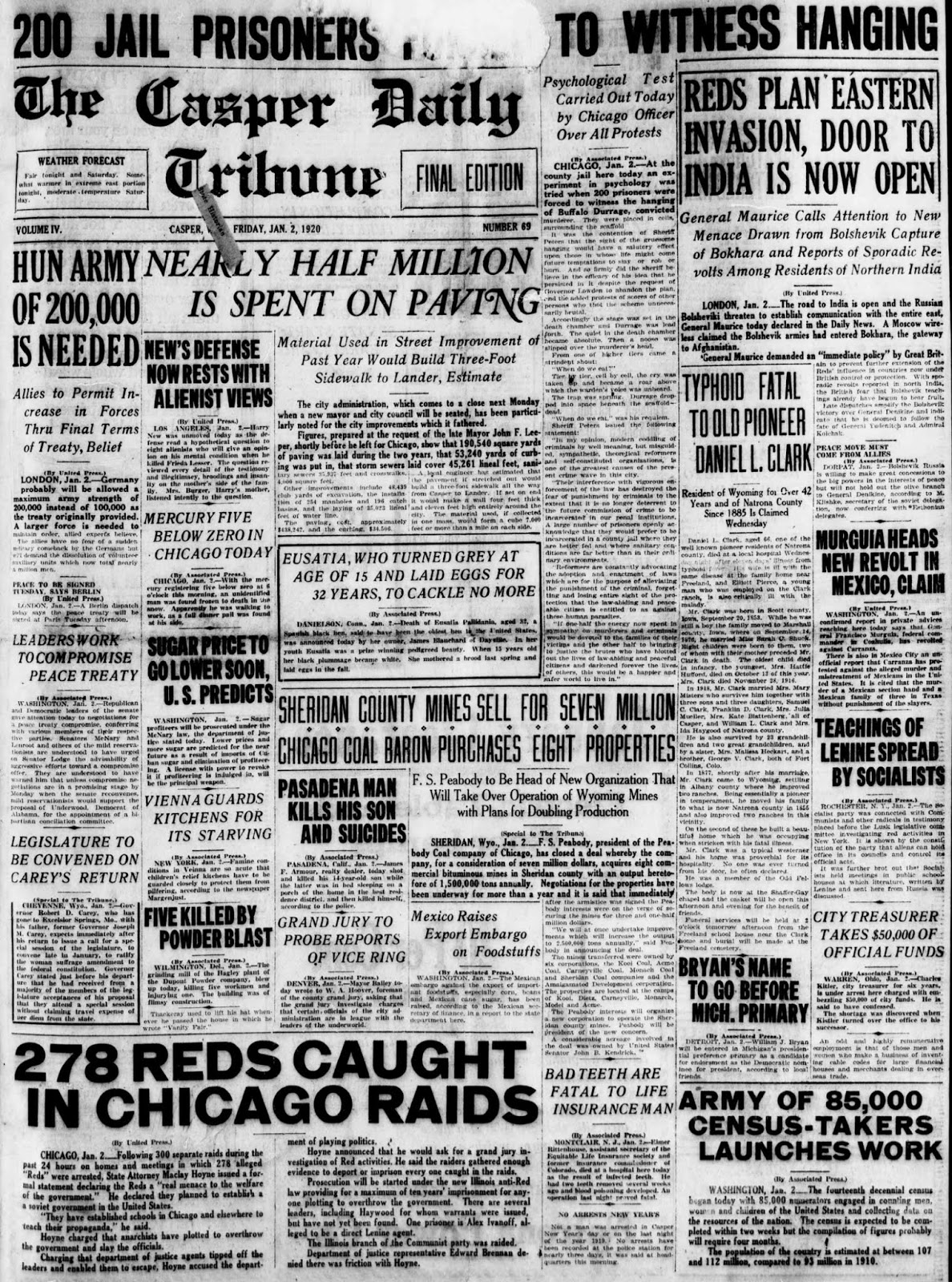 By the end of the raids about 10,000 people would be arrested.

A lot of the warrants were soon cancelled as illegal.  556 resident aliens were deported.  Originally the government reported having found a couple of bombs but later the news on that stopped, so whatever the truth of it is, it's vague.  Only two pistols were seized.  Public opinion turned against Palmer quickly and he went from being a probable contender for the Presidency to not being one.

1923  Secretary Hall, Secretary of the Interior, resigns due to the Teapot Dome Scandal.

1949  Beginning of the Great Blizzard that struck the Northern Plains this year.  In Wyoming, the storm started on this date and lasted until February 20.  Snowfall in some areas measured up to 30".  The storm halted all inter town transport of all kinds within the state within 24 hours.  Seventeen people died as a result of the storm.  55,000 head of cattle and 105,000 head of sheep were lost.

Elsewhere:   1905 Japanese Gen. Nogi received from Russian Gen. Stoessel at 9 o'clock P.M. a letter formally offering to surrender, ending the Russo-Japanese War, and sealing a humiliating event for Russia, but also creating lessons for the Japanese that they would follow to their detriment in the future.
Posted by Pat H at 1:00 AM