Today is Boxing Day (except when falling on a Sunday, when by Royal Proclamation, it is transferred to Monday).

Boxing Day has its origin as a religious Holiday in association with Christmas, and some traditions associate it with St. Stephen's Day, which is celebrated on this day.  The exact origin of it is unclear, but the name may be associated with poor boxes placed outside of church's on St. Stephen's Day which were used to collect funds for the poor, or for boxed gifts serving a similar purpose.

The day is associated with sports in some localities, including the equine sports.  It is the biggest single day for fox hunting in the United Kingdom, even after the ban of live hunts in 2004.  It is a major fox hunting day in the United States.  The King George VI Chase at Kempton Park Racecourse in Surrey is held on Boxing Day.

1813   The Spain granted Moses Austin permission to establish a colony of Americans expatriates in Texas.

1866   Brig. Gen. Philip St. George Cooke, head of the Department of the Platte received word of the Dec 21 Fetterman Fight in Powder River County in the Dakota territory.

1871   The newspaper the "Laramie Daily Independent".  Attribution.  On This Day .com.

1917     The U.S. government took over operation of the nation's railroads during World War One.

1917     The U.S. government took over operation of the nation's railroads during World War One. 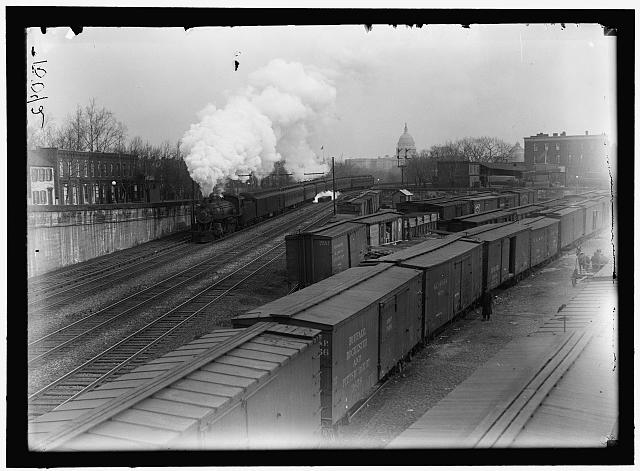 This was a big deal.

The extent to which labor strife was a factor in the early US history of World War One is a story that tends to be drowned out by the opposite story during World War Two.  With the lesson of the first war behind it, labor was highly cooperative during the Second World War and, for that matter, the war brought massive employment relief from the ongoing Great Depression.

The story wasn't at all same in regards to World War One.  Going into the war the nation was faced with labor strife in the critical coal and railroad industries.  On this day the Federal Government, giving a late unwelcome present to the railroads, nationalized rail and put the lines under the United States Railroad Administration.  The USRA would continue to administer rail until March 1, 1920.

The action wasn't solely designed to address the threat of rail stoppages by any means.  Rail was critical to the nation and formed the only means of interstate national transportation.  This would largely remain the case in World War Two as well, of course, but by then there were beginning to be some changes to that. For that matter, its frankly the case far more today than people imagine.  But in the teens, rail was absolutely predominant.

In spite of that, and in spite of their best efforts, the railroads simply found themselves unable to address the massively increased burden on the various national private companies, the accompanying inflation in rail prices, and addressing the needs of labor.  The Interstate Commerce Commission did what it could, but it finally recommended nationalization in December, 1917.  The President took action on the recommendation on this day.

The USRA's sweep was surprisingly broad, and it even included the standardization of locomotives and rail cars.  Over 100,000 railroad cars and 1,930 locomotives were ordered for the war effort, which the USRA then leased.

USRA Light Mikado pattern locomotive.
Showing, perhaps, the radical spirit of the time, the railroad employees unions not only supported the nationalization, but hoped and urged it to continue following the war.  This of course had no support outside unions and more radical quarters.  Nonetheless, because the formal legislative act that approved the nationalization, which came in March, had provided that the rail lines had to be returned to private ownership within 21 months following the conclusion of the war the failure of the United States to sign the Versailles Treaty necessitated a separate act to do the same, with that act strengthening the powers of the ICC. 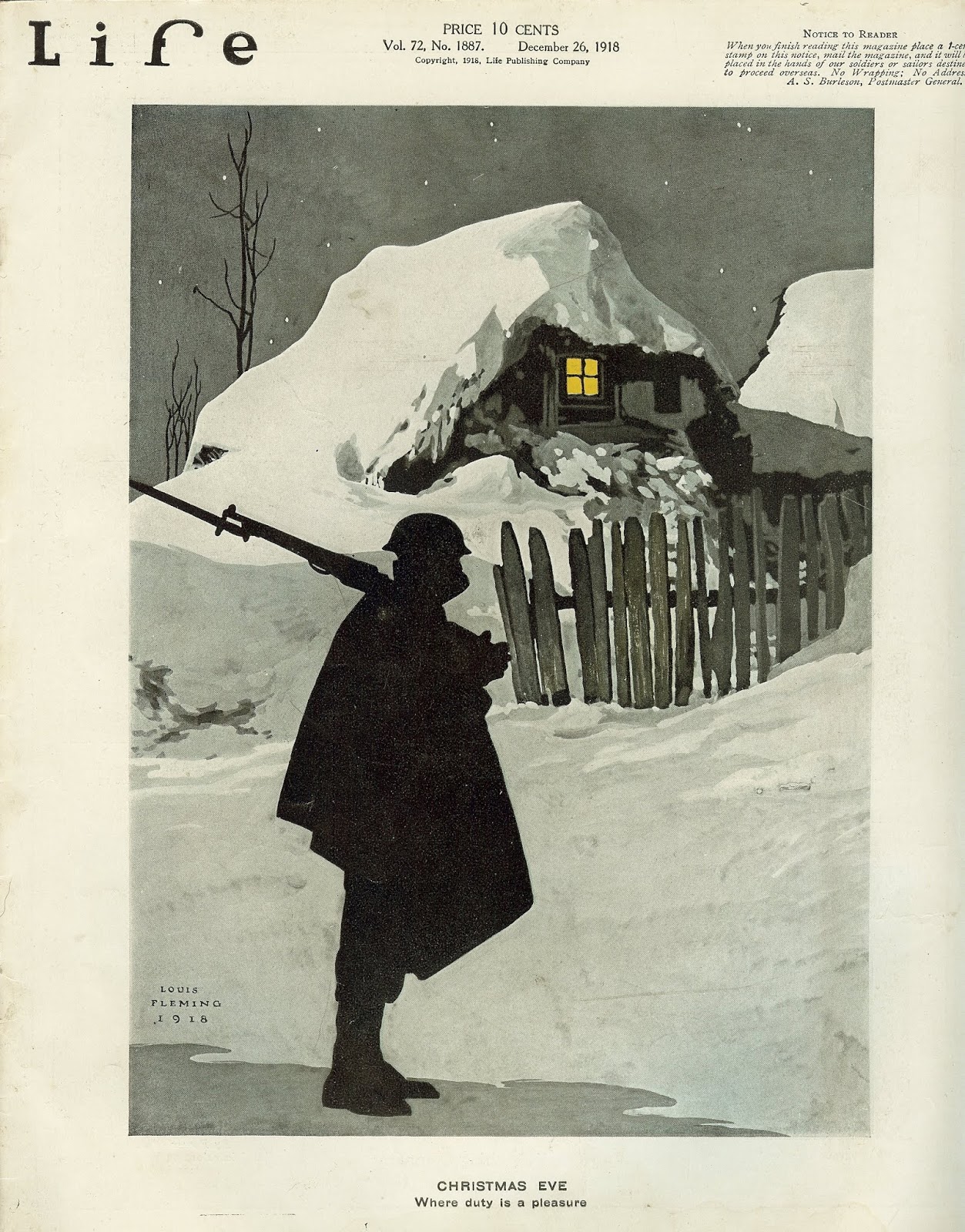 The December 26, 1918 edition of Life Magazine, which at that time was a magazine that featured humor, although this image, if it's supposed to be humorous, isn't.

December 26 is Boxing Day, a holiday in almost all of the English speaking world except, for some odd reason, the United States. Given that much of the United States's holiday traditions that are older stem from the United Kingdom,  including some aspects of the Christmas holidays, it's surprising that Boxing Day isn't observed in the U.S. while it is in nearby Canada.* 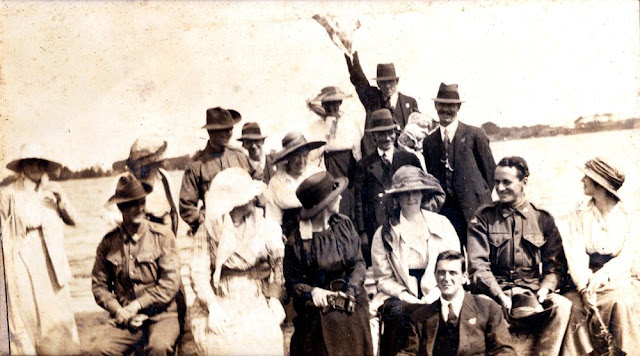 Australian convalescence soldiers and volunteers out on Boxing Day, 1918.  Photo courtesy of the University of Wollongong, Australia.

In most of the English speaking world, the day is a day off.  It's also a day that has traditionally been devoted to sports and the like.  In British Army units, including units from the Dominions, it's likely that there were games of various types.  Horse racing and equestrian sports, which are a traditional Boxing Day activity, likely was likely part of that.  FWIW, it was in Austria that year (maybe it is every year), as soccer matches were held. 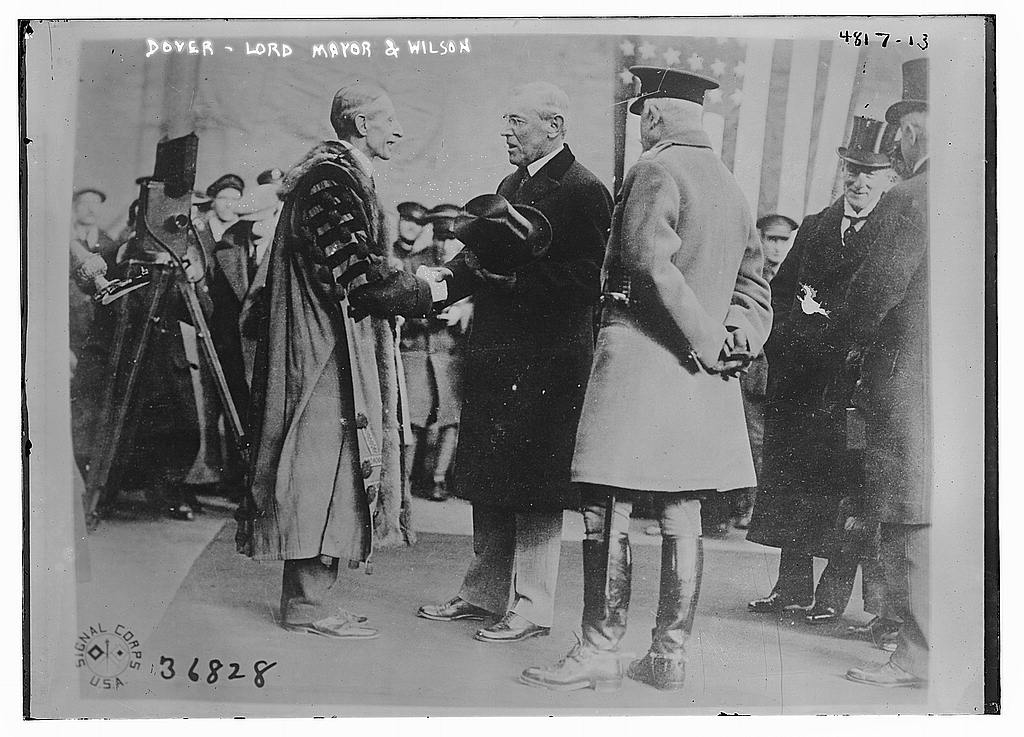 Whatever else was going on in the UK, dignitaries were meeting Woodrow Wilson who was visiting the country.  Elsewhere, British troops were engaged in active combat service, as for example off the coast of Estonia where the HMS Calypso and the HMS Caradoc ran the Red Russian Navy destroyer Spartak aground. 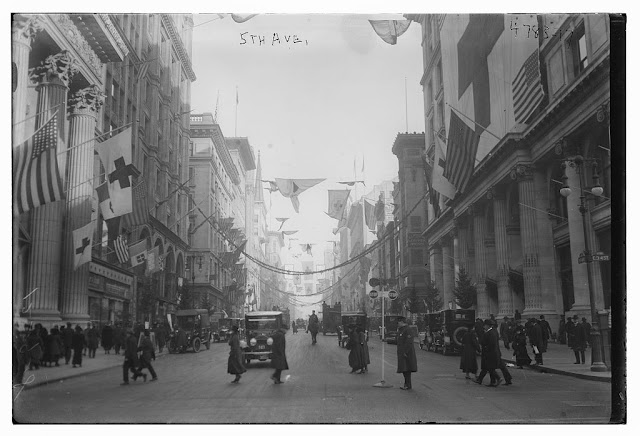 In New York, the U.S. Navy, or rather some elements of it, were committed to a big victory parade. 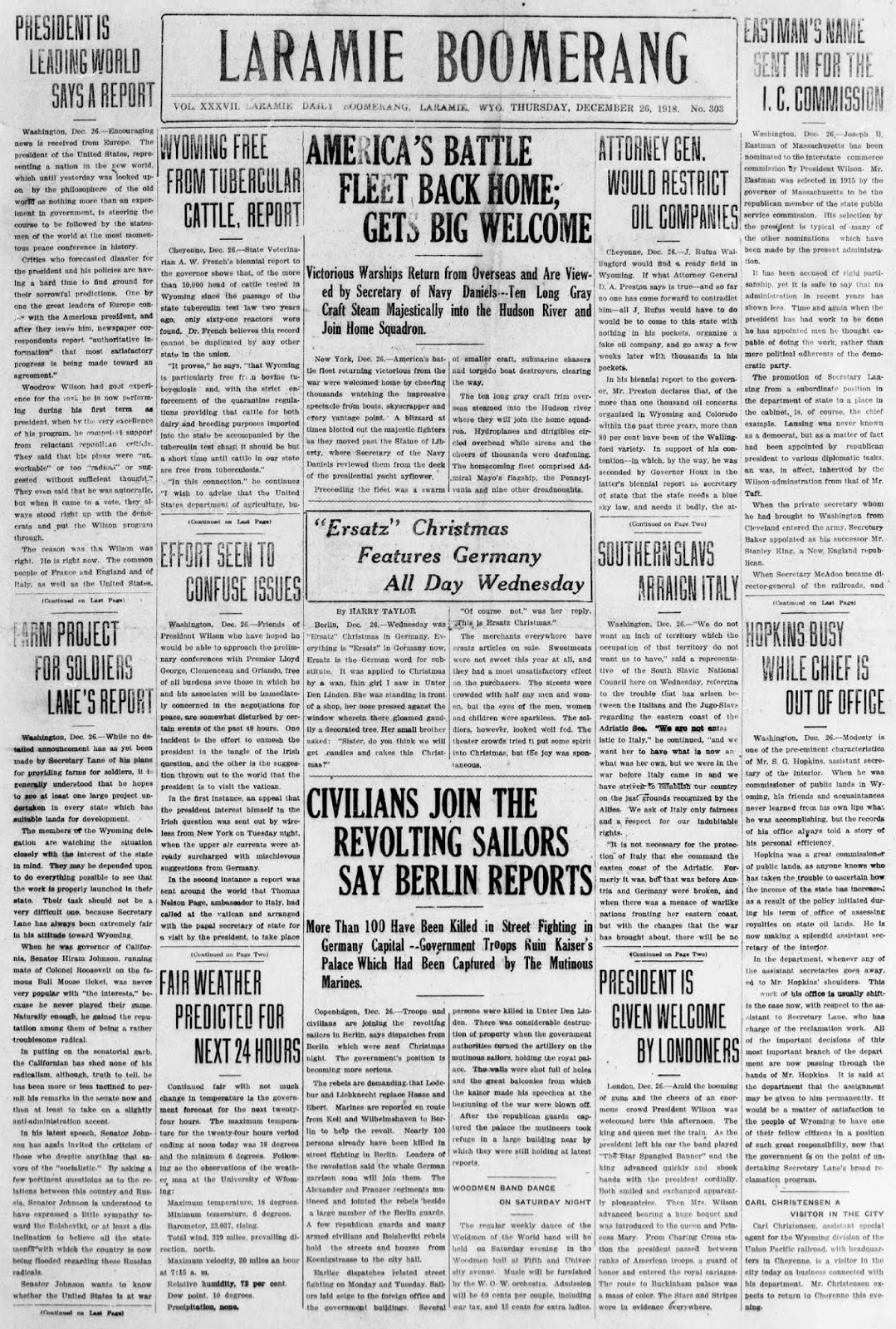 The Laramie Boomerang reported on the celebrations in New York City. 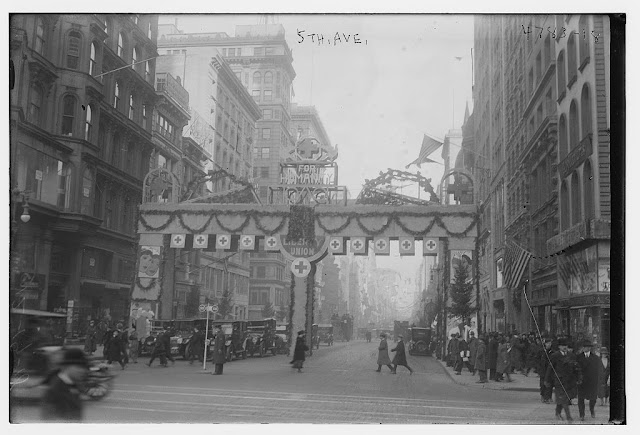 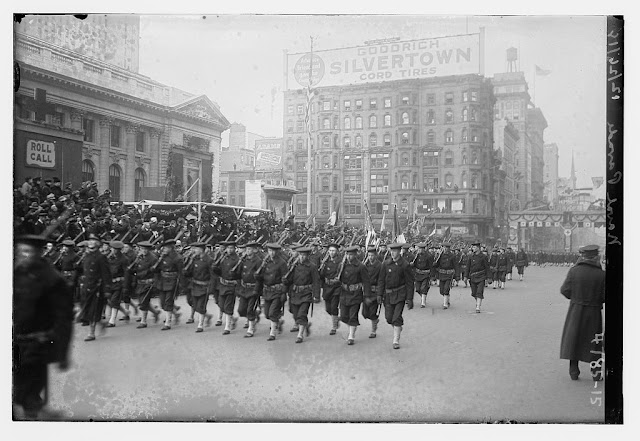 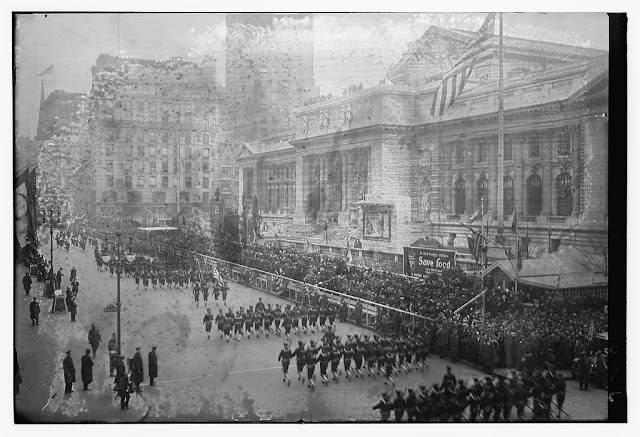 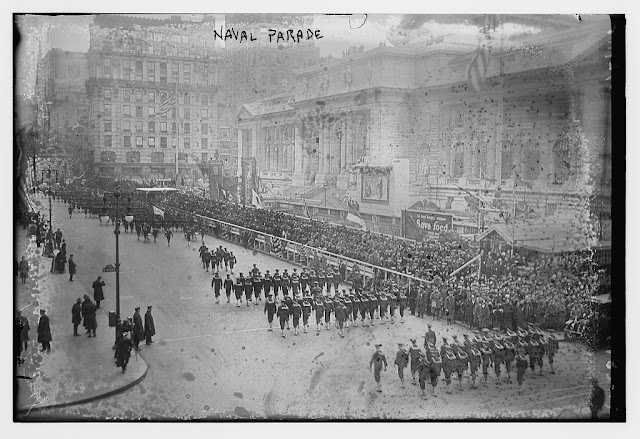 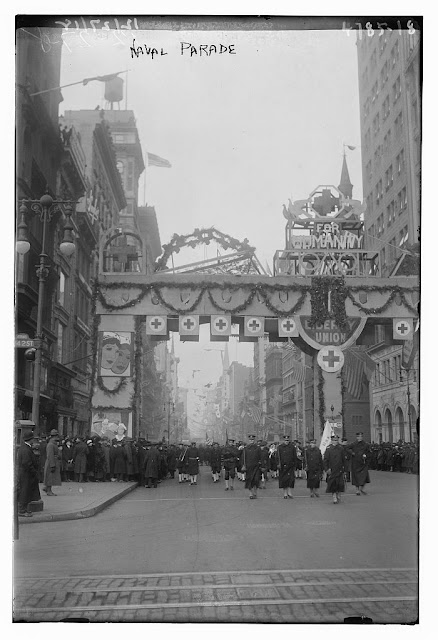 *Examples of British holidays incorporated into American tradition are Thanksgiving, which isn't really a thing though up by the Mayflower Pilgrims (it was a commonly observed English harvest religious holiday) and the observation of Halloween, which originally was an Irish observation of All Hallowed Even in which the poor went door to door in search of the gift of food in exchange for a promise to pray for that family's dead.
1920  Pancho Villa escapes from prison in Mexico and crosses into the US.

1922  A holdup of a Casper army store results in $112.00 being stolen.  Attribution:  Wyoming State Historical Society.

1929  This Christmas Tree was photographed somewhere in Wyoming:

1941   President Franklin D. Roosevelt signs a bill establishing the fourth Thursday in November as Thanksgiving Day in the United States.

1941  Rawlins Wyoming employment office received an urgent call for skilled workmen and laborers to work at Peal Harbor.  No doubt the same request was made in many localities across the country.  Attribution:  Wyoming State Historical Society.

2006     Gerald R. Ford, the 38th president of the United States, died in Rancho Mirage, Calif., at age 93.  Ford was born in Omaha Nebraska to parents  Dorthy and Leslie Lynch King and was originally named Leslie L. King Jr.  His parents separated a mere sixteen days after his birth, and he saw his father only once during his lifetime.  His father, not an admirable person, provides a connection with Wyoming, however, as the senior king lived in Riverton for many years and his paternal grandfather was a successful businessman in Casper, Douglas, Lander and Omaha.  Ford later worked as a park ranger in Yellowstone National Park in 1936.

2008  A swarm of over 900 earthquakes occurred in Yellowstone over a wide area.  The earthquakes measured up to 3.9 on the Richter Scale.
Posted by Pat H at 12:00 AM