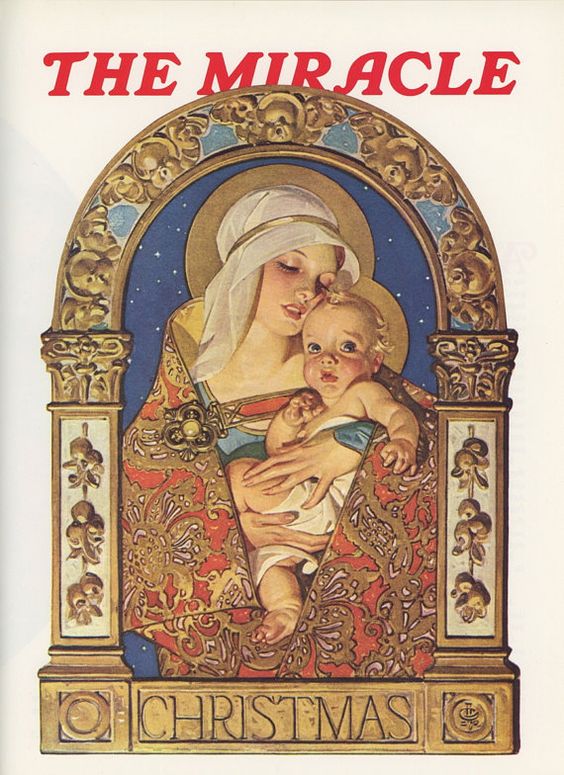 This day remains the most popular holiday in the Western World, and much of the rest of the world, in spite of the inroads of commercialization, the return of the seven day a week workweek, and the blathering of commercial entertainment, which offers up, in this season, such pathetic offerings as the televised seasonal stupidity of Chevy Chase and other such alleged comedic attempts.  May you all have a Merry and Joyous Christmas, in the true sense of the words and in keeping with the true meaning of the holiday.

In terms of history, in recent years it is often claimed that the December 25 date was chosen by the Church for Christ's Mass as it would override existing Pagan feast days, but this is a myth.  The most common claim involves Sol Invictus, but the problem with this assertion is that the earliest recording of that Pagan day being celebrated on December 25 comes from the year 354, and even that is unclear as to whether the day was honoring "The Unconquerable Sun" or something else.  There are claims for earlier dates in the 270s, but the record doesn't support a clear date until 354, to the extent that date is even clear.  The earliest indication of  Christians celebrating the Birth of Christ on December 25 comes from 206, over a century and a half earlier, and in a form suggesting that the date was generally accepted, which would indicate it having been established for some time.  Some will cite to 336 as the year in which the date was established, but this fails to acknowledge that the 336 date reflects a recorded Christ's Mass, when earlier Christian writings were noting that the December 25 date for Christ's birth.  Even the 336 date doesn't reflect the establishment of the date as a Christian Holy Day, but rather notes a Mass being celebrated for the Holy Day.

Another claim is that it overrides the date for a festival committed to Saturnus, but in fact that event occurred earlier in December, lasted several days, and was over by December 23.

1866 Portugee Phillips arrives at Ft. Laramie after a harrowing several day ride from besieged Ft. Phil Kearny. Contrary to myth, Phillips did not make the entire ride alone, but had other civilian volunteers in his company except for the very last section of the ride.  Their mission was essentially complete when they arrived at Horseshoe Station, where news of the Fetterman defeat was telegraphed to Omaha.  But Phillips went on alone, an additional hours ride, to bring the telegram and news to Ft. Laramie, arriving at 11:00 p.m. as a party was going on in Old Bedlam, the bachelor's officers quarters, which his arrival interrupted and made somber.  Phillips was given the gift of a fine horse by Company F of the 2nd Cavalry for his efforts.


On this day in 1917 Mexican raiders attacked Brite's Ranch in Texas. This resulted in a two day running fight that ultimately involved the U.S. Army's 8th Cavalry, including motorized elements of the same. 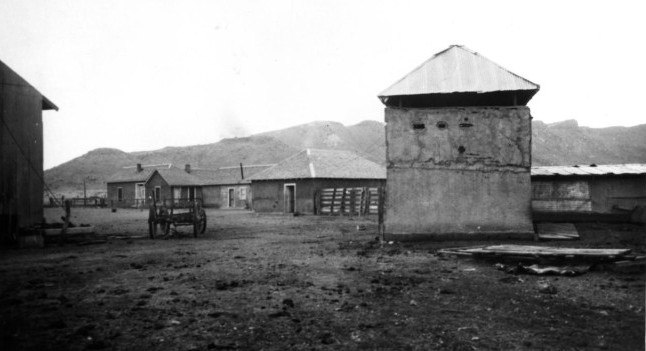 Brite's Ranch in 1918, including small fort built on the location by the Texas Rangers for defensive purposes.
The Mexican forces responsible for the raid were never clearly identified.  Villistas were logically suspected for the raid at first, and may well have been responsible. However, Carrazaistas came to also be suspected to have been involved. Whether or not they were has never been determined. At the same time it cannot helped but be noted that the border had become lawless and the raids that came out of Mexico in this time period did not necessarily have any political motive and some of them were simply armed criminal expeditions.  Some had mixed purposes.
The raid started at about dawn when a party of about 45 or so Mexican raiders rode into Brite's Ranch, which was not only a ranch headquarters but a small town as well.  Only one man, Sam Neill, the son of the ranch manager, was awake at the time but realizing what was happening he armed himself and engaged the raiders. This soon awakened others there and the fight expanded and went on for some time until the Mexican raiders captured two Mexican ranch hands and bargained for their lives for entry in to the general store, which was then granted to them.  As they were robbing the store, a postal carrier with two Mexican passengers arrived and all three of them were killed by the Mexican raiders, bringing the total deaths in the raid to four.
The Neill's were hosting a Christmas party that night and as a result as the hour for the party arrived guests began to arrive and this resulted in the resisting party being expanded and the alarm being spread.  The message was carried to Lucas Brite in Marfa by telephone and then to the 8th Cavalry and the local sheriff, who formed a joint posse and cavalry detachment that then drove the raiders back into Mexico.
The following day men of the 8th Cavalry, who had arrived at Brite's Range by automobile, borrowed horses from the ranch and launched a punitive raid into Mexico, hoping to catch the responsible parties.  They met with additional cavalrymen near the Rio Grande and a detachment of about 200 troopers entered Mexico. The cavalrymen caught up up with the raiders and engaged them near Pilares, killing about 29 of them and recovering some of the stolen property.
This story would not end here, unfortunately, as the events that were unleashed by the raid on Brite's Ranch inflamed feelings on the border and would lead to tragedy, as we will see in a later entry on our real time exploration of the Punitive Expedition and the events that preceded and followed it.
So, while all eyes were on France, things were getting tense again on the Mexican border. 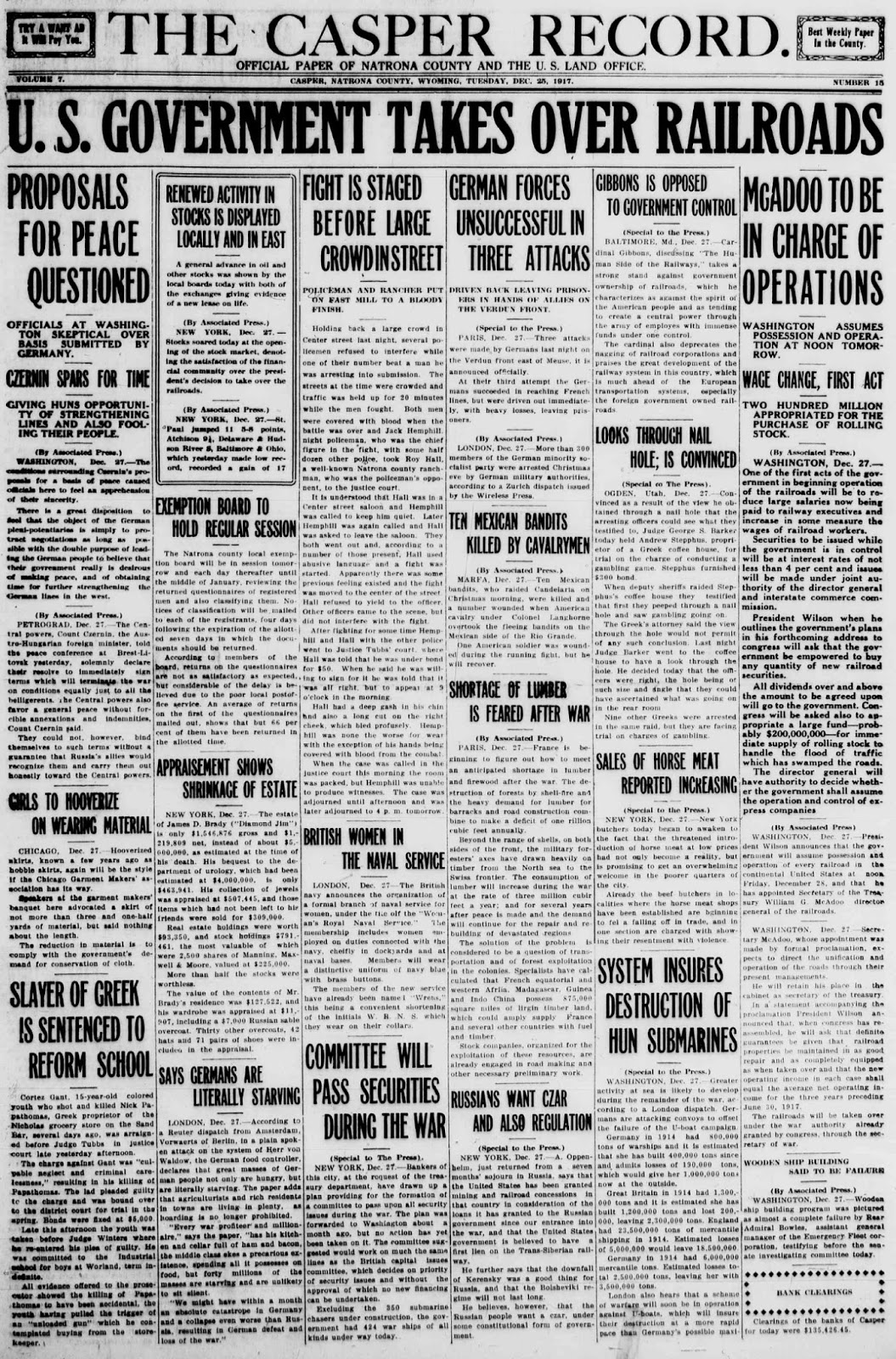 The Brite's Raid made the cover of the Casper Record in a not very Christmasy issue, along with something that would actually happen the next day rather than on Christmas Day.  Hooverize?
Posted by Pat H at 12:00 AM