The iconic Western movie, of course.

It's a movie that I haven't reviewed yet (I guess this will have to suffice for the review), in spite of an effort here to catch movies of interest that are "period pieces", if you will, which all non fantasy movies set in the past are.

The 1969 movie is one of the best loved and best remembered western movies.  It took a much different tone in regard to Western criminals than the other major Western of the same year, The Wild Bunch.  I frankly prefer The Wild Bunch, which as I earlier noted is a guilty pleasure of mine, but I love this film as well.

Butch Cassidy and the Sundance Kid is a romanticized and fictionalized version of the story of the two Wyoming centered Western criminals who ranged over the entire state and into the neighboring ones.  In the film, which is set in the very early 1900s before they fled to Boliva, and which follows them into Bolivia, the two, portrayed by film giants Paul Newman (Butch) and Robert Redford (Cassidy), come across as lovable rogues, and barely rogues at that.  The film had a major impact at the box office and came in an era in which the frequently predicted "end of the Western movies" had already come. 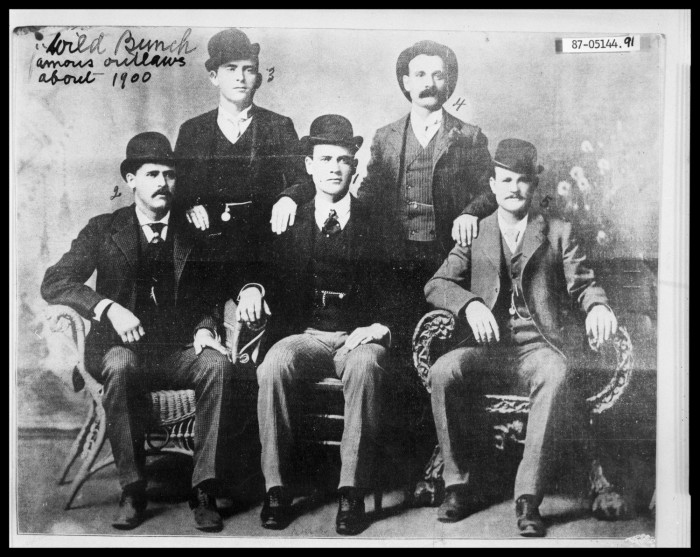 The Hole In The Wall Gang, lead by (Robert LeRoy Parker) Butch Cassidy, far right, and Harry Lonabaugh (the Sundance Kid). This photograph was a stupid move and lead to their downfall.
So how accurate is it?
Well, pretty mixed.

Even the Pinkerton Detective Agency allows that they are the two romanticized Western criminals, and there are quite a few romanticized Western criminals, are closest to their public image. They were intelligent men and got away with their depredations in part as there were locals who liked them well enough not to cooperate with authorities, although that was also true of much less likable Western criminals.  And the vast majority of characters in the film represent real figures who filled the roles that they are portrayed as having in the film.  So in that sense, its surprisingly accurate.
Where it really fails, of course, is in glossing over the fact that they were in fact violent criminals.  And as outlaws their history is both violent and odd for the era.  The Wild Bunch, the criminal gang with which they are most associated, was extremely loosely created, and people came and went, rather than there being just one single group of outlaws.  The Wild Bunch itself generally took refuge, when it needed to, in Johnson County's Hole in the Wall region (their cabin exists to this day) and perhaps because of this or because of several of them being associated with the Bassett sisters, the daughters of a local small rancher, their activities oddly crossed back and forth between pure criminality and association with the small rancher side of the conflict that lead to the Johnson County War.  This latter fact, once again, may have contributed to their image as lovable criminals, even though they themselves were not in the category of individuals like Nate Champion who were actual small cattlemen who were branded as criminals by larger cattle interest. The gang was, rather, made up of actual criminals.
So the depiction of them simply attacking the evil (in the film) Union Pacific is off the mark. They were thieves.  Just less despicable thieves than most.
They did go to Bolivia and their lives did end there, according to the best evidence.  The film accurately portrays their demise coming in the South American country even if it grossly exaggerates that end, persistent rumors of at least Butch's survival aside.
Material detail wise the film is so so.  This late 1960s movie came at a time at which a high degree in material details, a bar set by Lonesome Dove, hadn't yet arrived, so the appearance of things reflects the movie styles of the late 1960s more than the actual appearance of things in the early 1900s.  Arms, however, are correct as in this movie making era the tendency to try to stand out by showing unique items in use hadn't arrived.
All things being considered, it is a great Western and well worth seeing.  It belied the belief that the era of Westerns was over, and in some ways it recalls earlier sweet treatment of Western criminals who were supposed to be just wild boys at heart.  Nobody gets killed in the film until Butch and Sundance do at the bitter end, which contributes to that.  In reality, The Wild Bunch is likely a more realistic portray of Western criminals, but this is a great film.
Posted by Pat, Marcus & Alexis at 5:11 AM