As followers of the blog know, I have, over the past few months, posted a few items on certain ethnic groups that have had a prominent role in Wyoming. Some may have wondered why, in doing that, I haven't posted any on Native Americans, or as the Canadians like to call them, the First Nations.  I don't have a really good excuse, other than its actually a surprisingly complicated topic and somewhat difficult to do. 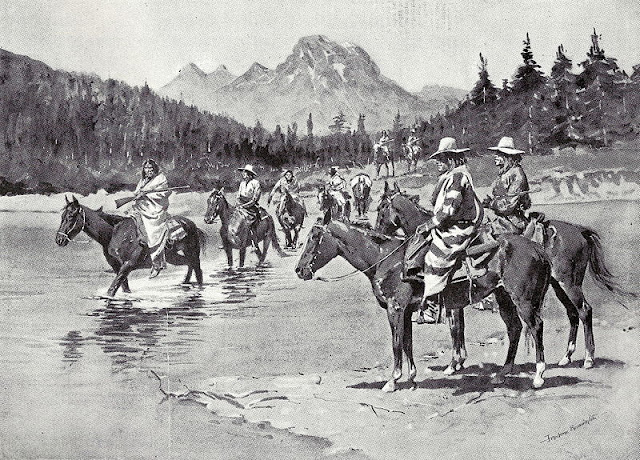 
It would be tempting to post one with this title, but I'm not going to, other than to introduce this topic, as it would be unfair to the various tribes that have in the past, or presently called Wyoming their home.  It's common to see terms such as "Plains Indians" and the like to describe the native inhabitants of any one region of the upper West, but the fact of the matter is that Indian tribes represent a group of ethnicities, rather than one single one.  Still, as an introduction, it makes sense to at least handle the topic collectively to get it rolling.

In the popular imagination, Pre Colombian North American was populated by rather fixed Indian populations.  In reality, however, this was far from true, and this was particularly untrue in the arid West.  Native populations were not only aboriginal, they were in a near constant state of migration, albeit slow migration, prior to their contact with European Americans, or even after it.  We know, for example, that both the Navajos and the Apaches are Athabaskan peoples, whose nearest ethnic relatives live in the Canadian far north.  The Navajos first, and the Apaches after them, started migrating south at some point for reasons not known, and when the Spanish first contacted them they were still on their way south.  Their cultural memories still retained memories of great white bears and fields of migrating birds, things their ancestors had observed in the far North decades and decades prior, but not so many prior that the memory was not retained. And so too with many other Indian cultures.

For the most part, the history of Indians in the West begins wit their first contact with Europeans operating out of the United States, Mexico or Quebec.  What occurred prior to that is a bit murky.  We know that Wyoming, in ancient times, had populations of natives that built pit houses, a practice not engaged in by any of the later tribes, and which may very well have been constructed by the ancestors of a people that had moved far to the south by the time the Corps of Discovery made the first U.S tour of the area. That early history is important, however, in that  these people left some sort of a record of their presence.  Seemingly living in a somewhat wetter era, they lived in a less nomadic manner than their later ancestors, and had seasonal fixed dwellings.  Theories exist as to who they may have been, and we don't really have a very solid idea of what people or peoples they were, other than that they were there.  They also seem to have been the first people to leave a record in stone, such as with the Medicine Wheel, with such structures remaining in use by later peoples, who perhaps conceived of them differently.  Research goes on, and perhaps some day we'll know a great deal more than we currently do.

More recently we know that Wyoming was the home of certain tribes in the 18th Century who remained in the 19th Century.  The Shoshone, a people speaking an Utzo-Aztec language, was one of those groups, and perhaps the most dominant.

The history of the Shoshone will be dealt with in a separate entry, given that their presence in the state is so significant, and it will have to suffice here to simply note that this people had a long and significant presence in the state.  They still do, as they are one of the two tribes that have, as their reservation, the Wind River Indian Reservation.

The Crows, or Absarokas, likewise had a long history in the state..  The Crows speak a Siouian language and were a significant Plains people whose range stretched far into Wyoming when European Americans first entered the state.  Like the Shoshone, and the other peoples mentioned here, they'll be addressed separately.  It's interesting to note, however, that the Crows and Shoshone fought each other prior to European American contact, but they were both allies of the United States in the Indian Wars of the 1860s and 1870s, as the jointly attempted to arrest the progress of the Sioux and Cheyenne in entering the state.  Unlike the Shoshone, the Crows do not have a reservation in Wyoming, but they still have some presence, and the major Crow reservation is located just over the Montana border.

The Sioux, a collection of closely related people, and the Cheyenne, a group that was allied to them, likewise had a major role in the state.   Neither group had a long history in the state, or perhaps even any history, when European Americans first entered Wyoming. The Sioux and the Cheyenne were, rather, invaders, and highly successful ones at that. That too is part of the story.  Interestingly, their alliance was one that overcame an ethnic divide between the people, as the Cheyenne spoke an Angonquian language, not a Siouian one.  The Cheyenne, for their part, were a stunningly wide ranging people whose presence stretched northward into Montana and southward down to Oklahoma.  As with the Crows, neither the Sioux nor the Cheyenne have reservations in Wyoming, but they do have ones nearby, with there being a Sioux reservation in South Dakota and a Cheyenne reservation in Montana, respectively.

The Arapaho were another group that were allied to the Sioux, and their ancestry may have, at one time, united them with the Cheyenne, although that is not known.  They'd entered the state prior to European contact, but they too were relatively recent arrivals.   The Blackfeet, who were present in northern Wyoming, were closely related to them, and in fact may have really been the same people.  The Arapahos were such a a small group that the Indian Wars were particularly perilous to their survival, which they recognized, and they are the other Wyoming tribe which is present on the Wind River Reservation today.

Paiutes and Utes also entered Wyoming, although more on its fringes. These people, who seem to be rather ignored in the history of the Plains, also spoke a Utzo Aztec language and therefore are related to the Shoshones in some fashion.  Of course, not too much can be placed on mere language groups, as English and German are both Germanic languages in the Indo European Language group, which has not meant for historic alliances.

The Comanche had their origin in Wyoming, as will be seen in the history of the Shoshone, a fact largely obscured by their later history. And the Cherokee crossed it and left their name in the form of a trail.

A group largely and unfairly ignored in Wyoming's history is the Metis.  We associate the Metis, a "mixed" group of people, mostly with western Canada today, but their range stretched far to the south and into the Powder River Basin.

As we progress though this story and try to make it complete, we will not cover every single group.  As can be seen, some peoples had tangential roles in Wyoming.   The Shoshone and Arapaho must be covered, of course, and will be treated to separate entries. So too will the Cheyenne, Sioux and the Crows.